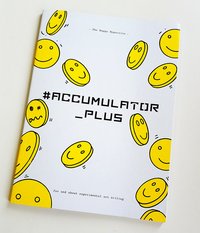 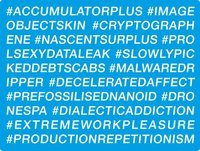 ‘#ACCUMULATOR_PLUS was part of an open call for words, images and sounds, asking for replies to a set of hashtags. My starting point was also a response; to the death of Colin Faver, to whom I dedicate the archive pages of this issue. Colin was playing pirate radio in my formative years. His shows were a portal into a world of new frictions, giving access to the underground." Hannah Sawtell

#ACCUMULATOR_PLUS seeks new ways of addressing questions of speed, communications technologies and the dynamics of interaction between local and global space, by revisiting recent underground histories spanning rave, pirate radio, Detroit techno and east London grime. With a live music event in London, broadcast in collaboration with NTS Radio. Read an interview with Hannah about this issue in Vice.